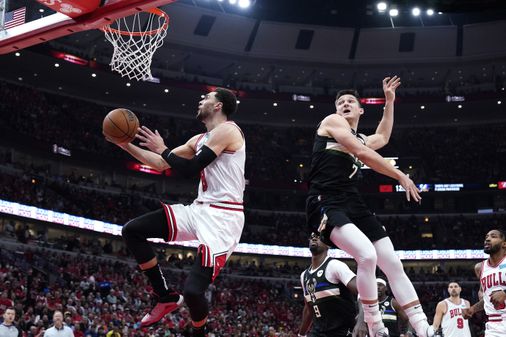 The Bucks won the past two games in Chicago by a combined 54 points, and the defending NBA champions did it without Khris Middleton, who is out with a left knee injury.

LaVine, meanwhile, has been in and out of the lineup for Chicago the past few months because of a sore left knee. Now, he’s in the health and safety protocols for the third time in a year: He tested positive for the coronavirus last April and again in December.

Bounce around the NBA with our Celtics-centric look at the latest happenings on and off the court.

“We’ve kind of dealt with this all year long,” Donovan said. “Whether it’s been injury and/or COVID, we’ve had guys in and out. I think a lot of times our mentality has been next guy up. Guys have done a pretty good job handling that. Any time you lose a player like Zach LaVine, there’s no question it impacts your team just as Middleton impacts their team.”

With guard Alex Caruso in concussion protocol after taking an inadvertent hit to the face from Milwaukee’s Jevon Carter on Sunday and point guard Lonzo Ball suffering a season-ending knee injury in January, the Bulls could be down three starters as they try to avoid elimination.

LaVine averaged 24.4 points during the regular season and made his second straight All-Star team. The eight-year veteran is averaging 19.3 points in his first playoff series.

Milwaukee Bucks guard Jrue Holiday has been named the NBA’s teammate of the year for the second time in three seasons. A panel of league executives selected 12 finalists for the honor, which is officially named the Twyman-Stokes Teammate of the Year Award. More than 300 current NBA players voted on the winner from that list of 12 finalists.

Players got 10 points for a first-place vote, seven for second place, five for third, three for fourth and one for fifth.

The Twyman-Stokes Teammate of the Year Award recognizes a player deemed the best teammate based on selfless play and dedication to his team, as well as leadership on and off the court as a mentor and role model to other players.

DeMarcus Cousins has been fined $15,000 by the NBA for kicking towels into the stands.

This is the video they attached in their release: pic.twitter.com/jIvGoh3Jqs

Nuggets center DeMarcus Cousins has been fined $15,000 for kicking towels into the stands during Game 4 of Denver’s first-round playoff series against Golden State. The incident occurred when Cousins returned to the bench after getting called for a personal foul with 7:27 remaining in the second quarter of the Nuggets’ 126-121 home victory on Sunday. Cousins finished with 10 points. Denver avoided a sweep with the win. Game 5 is Wednesday night.… Phoenix Suns coach Monty Williams has been fined $15,000 for publicly criticizing the officiating in Game 4 of the first-round playoff series against the New Orleans Pelicans. Williams made his comments to the media following the Suns’ 118-103 road loss Sunday. He said he did not want to take away from the Pelicans’ effort, but he was upset by the disparity in foul shots. “Forty-two to 15 in free throws — slice it any way you like to, in a playoff game that’s physical, that’s amazing,” Williams said. “Coaches shouldn’t have to come up to the microphone and feel like they’re going to get their head cut off for speaking the truth. It’s not like we didn’t attack the basket. That’s really hard to do. They outplayed us and they deserved to win, but that’s a free-throw disparity.”